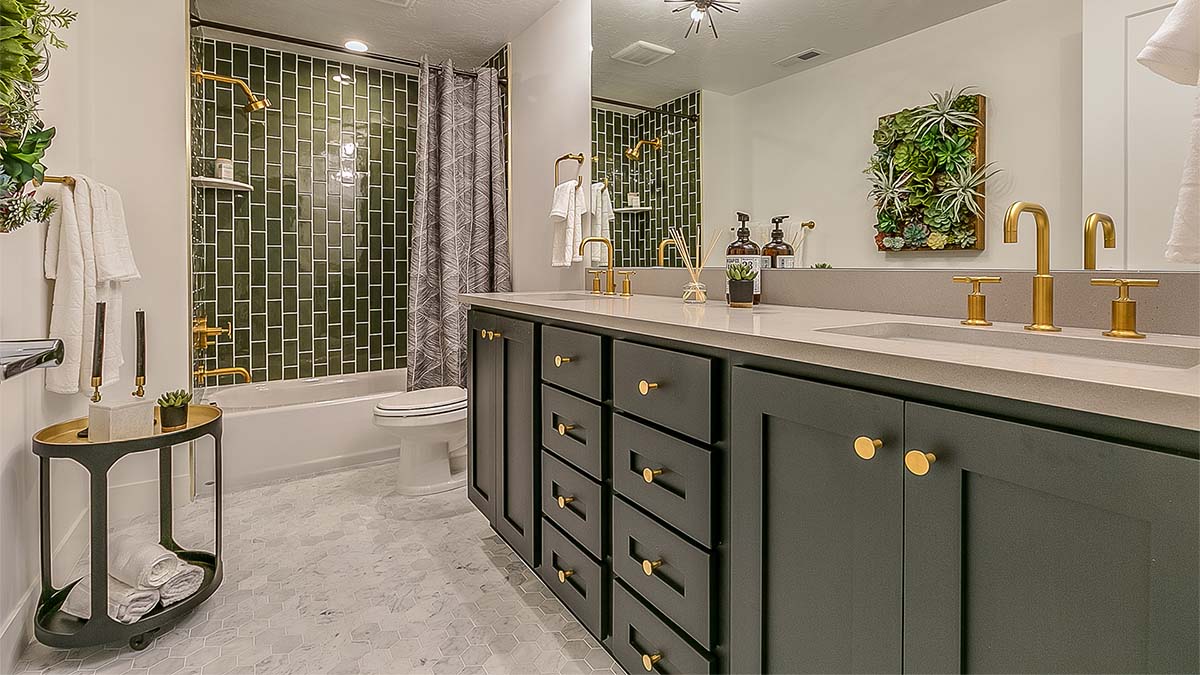 Bath Fitter is a family-owned business, operating since 1984, with all of their products being manufactured in the United States and Canada. They offer a product line that includes acrylic bathtubs and shower liners, free-standing bathtub and shower bases, acrylic seamless walls, domed ceilings, tub and shower doors, and accessories.

In short, these guys know interior bath remodeling, and they have the experience to back it up.

But no matter how good you are at something, it doesn’t mean you should try to do everything.

One Bath Fitter franchisee in particular was looking to improve their online presence and generate more bathroom remodeling leads so they could grow faster.

That’s where we came into the picture…

“Webrunner has been a game-changer for us. The landing pages they’ve created are beautiful and always maintained, the leads we’ve received are quality, and over the last 16 months, they’ve provided leads that have converted into over 285 additional bath or shower projects for our company!” 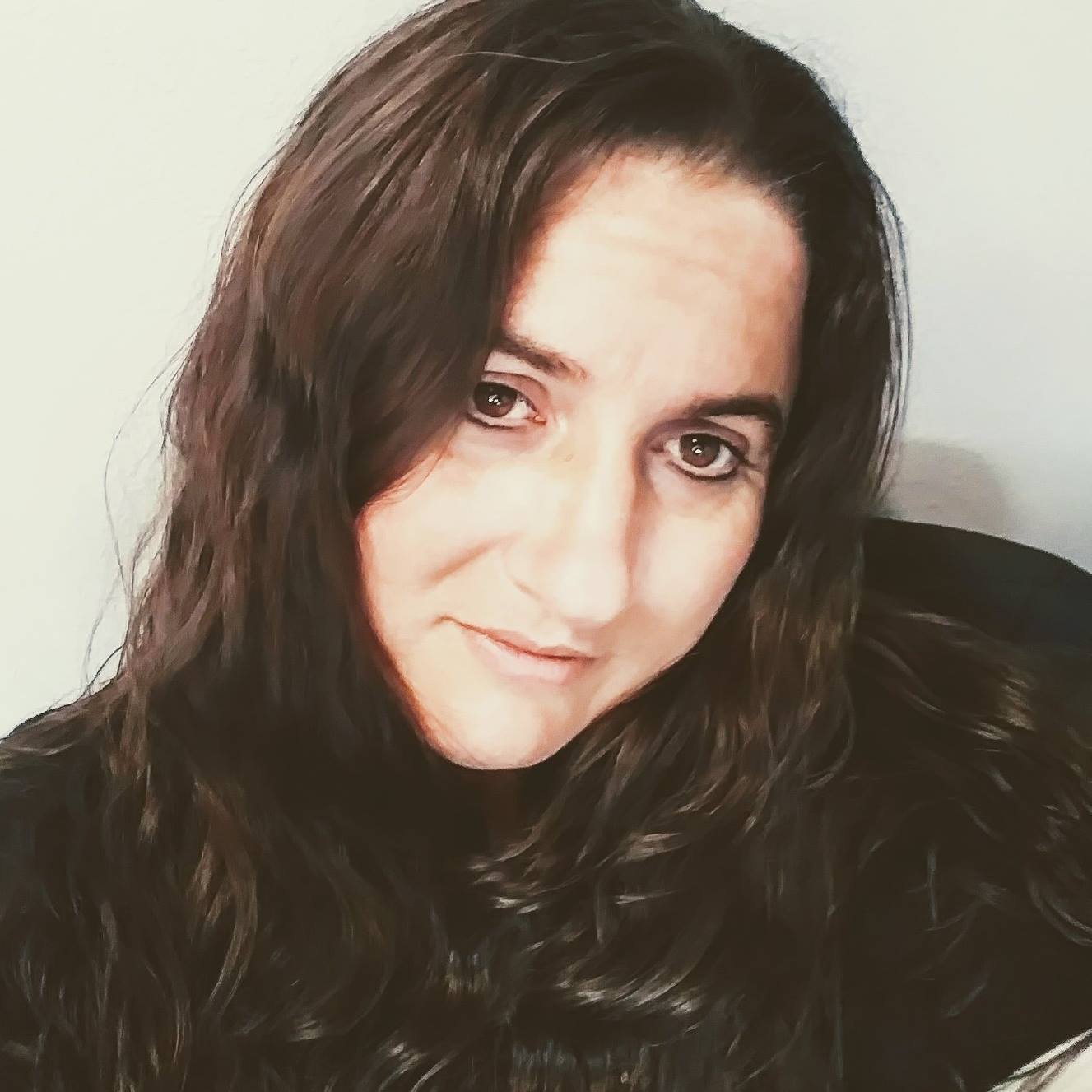 Did you know that home improvement is one of the most competitive industries when it comes to online advertising?
Download this free guide to learn how you can get more leads from the same marketing budget. 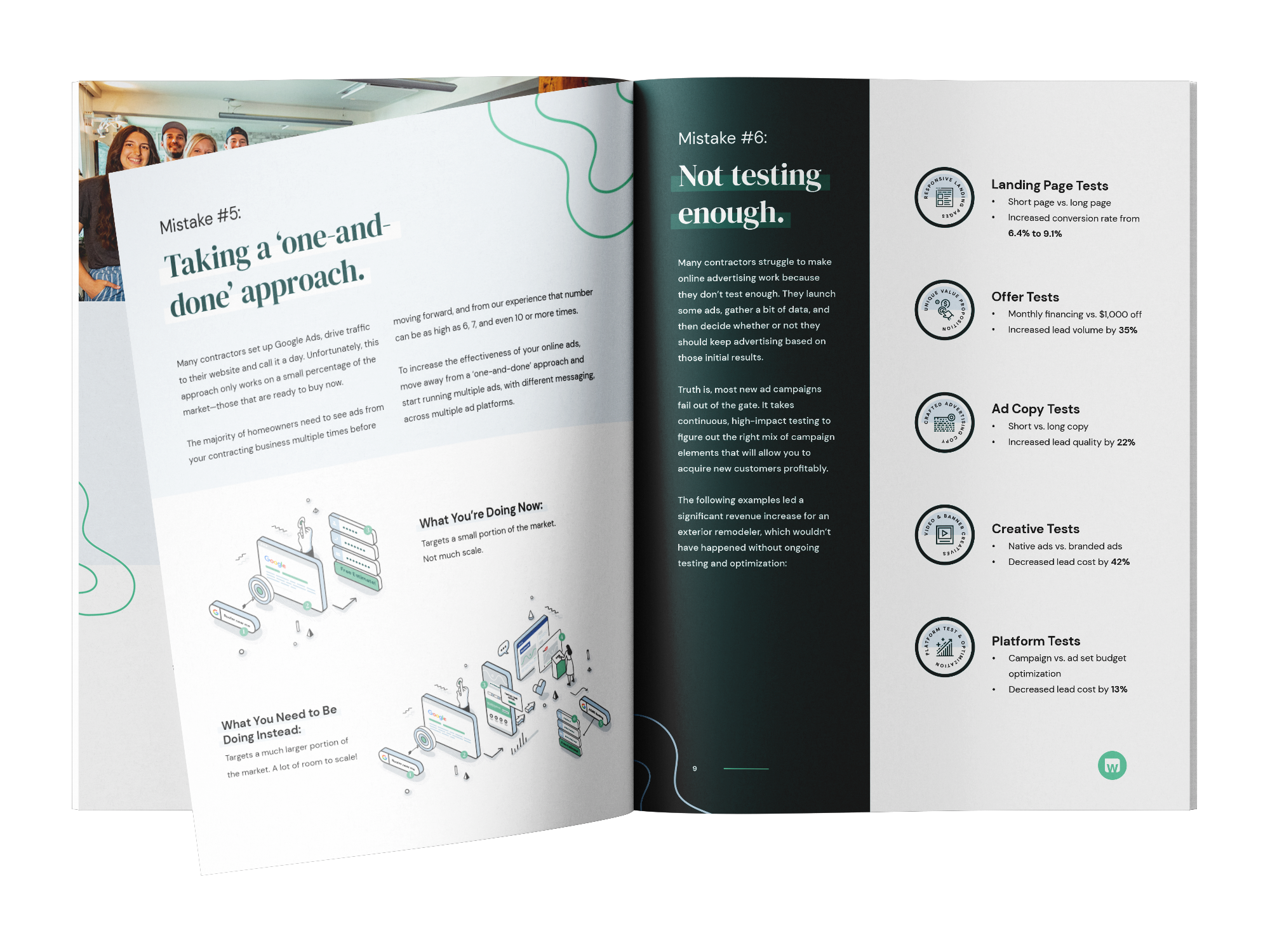 Speed to Lead, Lack of Branding & No Control Over Ad Spend

For years, Bath Fitter was paying for leads sold by a 3rd party vendor. Although they did acquire leads through this method, they needed a high volume of leads before closing a sale because the lead quality wasn’t great.

We’ve been hearing the same story for years. Many contractors have the same three problems as BathFitter when it comes to buying leads from 3rd party vendors: speed to lead, lack of branding, and no control over how their budget was being spent.

Let’s break this down…

Relying on this strategy to scale is definitely challenging.

After months of stagnation in their business, Bath Fitter decided to work with another vendor who would charge a minimum monthly fee, plus an extra fee for each lead generated.

On top of that, this Bath Fitter franchisee would have to cover the fees for their media budget.

It was an upgrade from their initial lead generation strategy, as now their advertising was at least branded “Bath Fitter.” This was a massive win for them as they could get their value proposition across to prospective homeowners before the call even came in.

The main problem here was that Bath Fitter had no direct control over how the leads were being generated. This meant that they didn’t have access to their Google or Facebook accounts to verify if their media budget was being invested properly.

This lack of autonomy and visibility eventually drove the management team to look for other lead generation solutions yet again.

Now that we’ve identified the problems, let us walk you through the solution!

Just as they were on their last two drops of patience with their current system, Webrunner came highly recommended through a mutual friend.

After our initial conversation, we concluded that there were 3 goals we wanted to achieve and maintain throughout our relationship:

Right off the bat, as soon as we created Google and Facebook accounts for this Bath Fitter franchise, we gave them immediate ownership of their account so that they were able to log in any time to review their spending and results.

Full transparency to what, where, and how we were spending their ad dollars; whenever they wanted.

We also created a custom marketing dashboard that tracks all of the important metrics (traffic, lead volume, cost and revenue, etc.) which could be accessed at all times.

Not only does this dashboard bring more clarity to actions that are being taken, but it makes scaling much easier. It provides both us and the client with the data we need to make strategic marketing decisions that make growth possible.

This took both time and patience, but within two years of working with us, this Bath Fitter franchise saw a 300% increase in qualified leads and an additional 6 figures in monthly revenue, and the results continue to improve!

Let’s dig deeper to see how this was achieved.

The marketing strategy we take with each contractor is different and customized to fit their needs and growth goals. For Bath Fitter, we went with a three-step strategy: 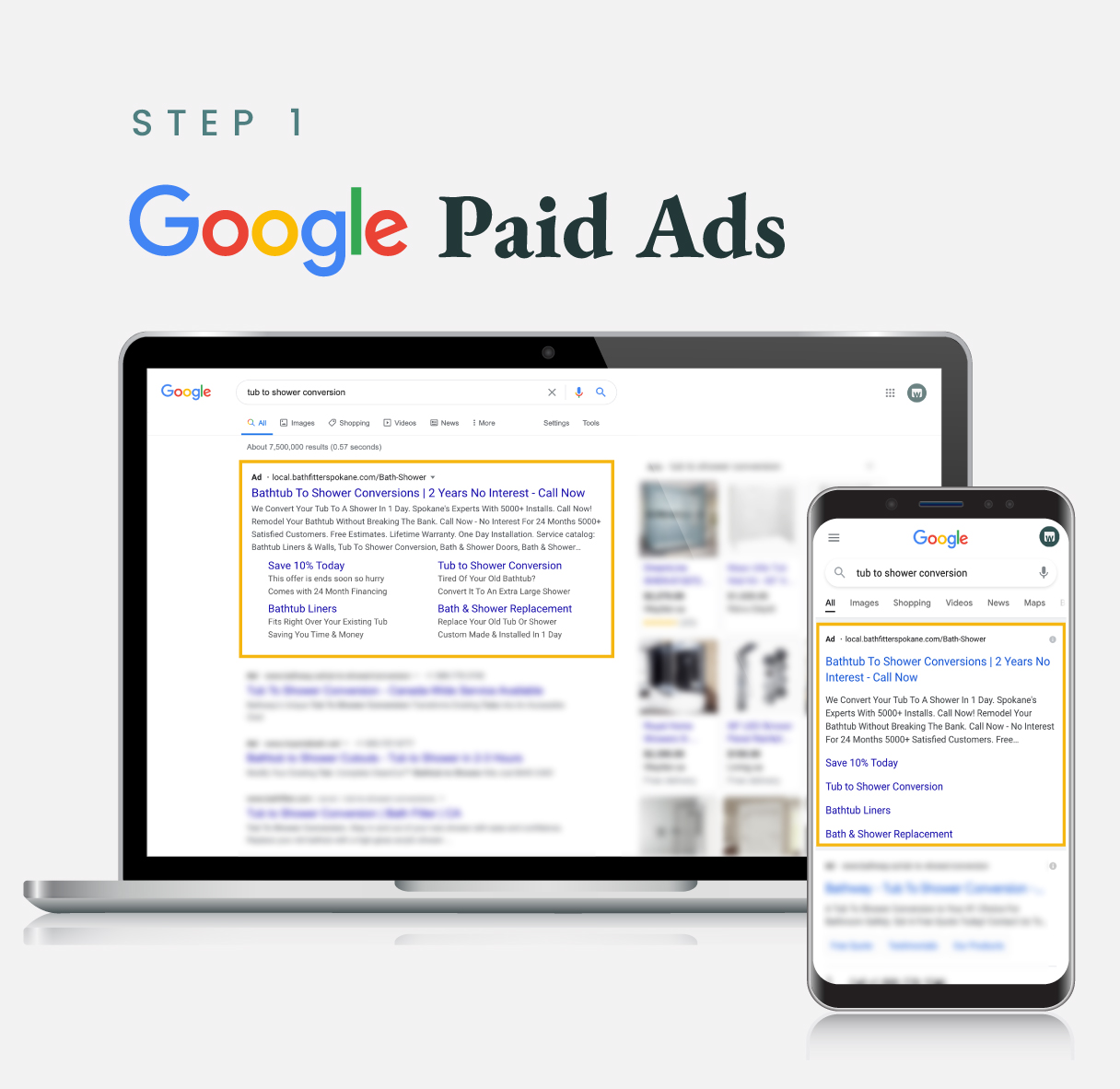 Google Ads is our go-to first step with nearly all the contractors we work with.

Why? Because Google Ads tend to generate the highest quality leads as the leads have a higher intent. Meaning, many people start with a Google search when looking for a contractor for their project.

We use a meticulous combination of keyword research, targeting, bidding, and budgeting so we can show your ads to the right people at the right time. This means that homeowners find you, instead of you having to find them!

Because our relationship with Bath Fitter was still in its infancy, we started slowly to ensure that a solid foundation of trust could be built.

We launched their Google Ad campaigns, and after $7.5K in ad spend, we had generated 61 bathroom remodeling leads that turned into $34,000K in revenue.

That’s nearly triple their return on investment without much time to test and optimize things, so we knew the results would only get better over time.

Besides the numbers, what was most important here was both the quality and consistency of the leads. 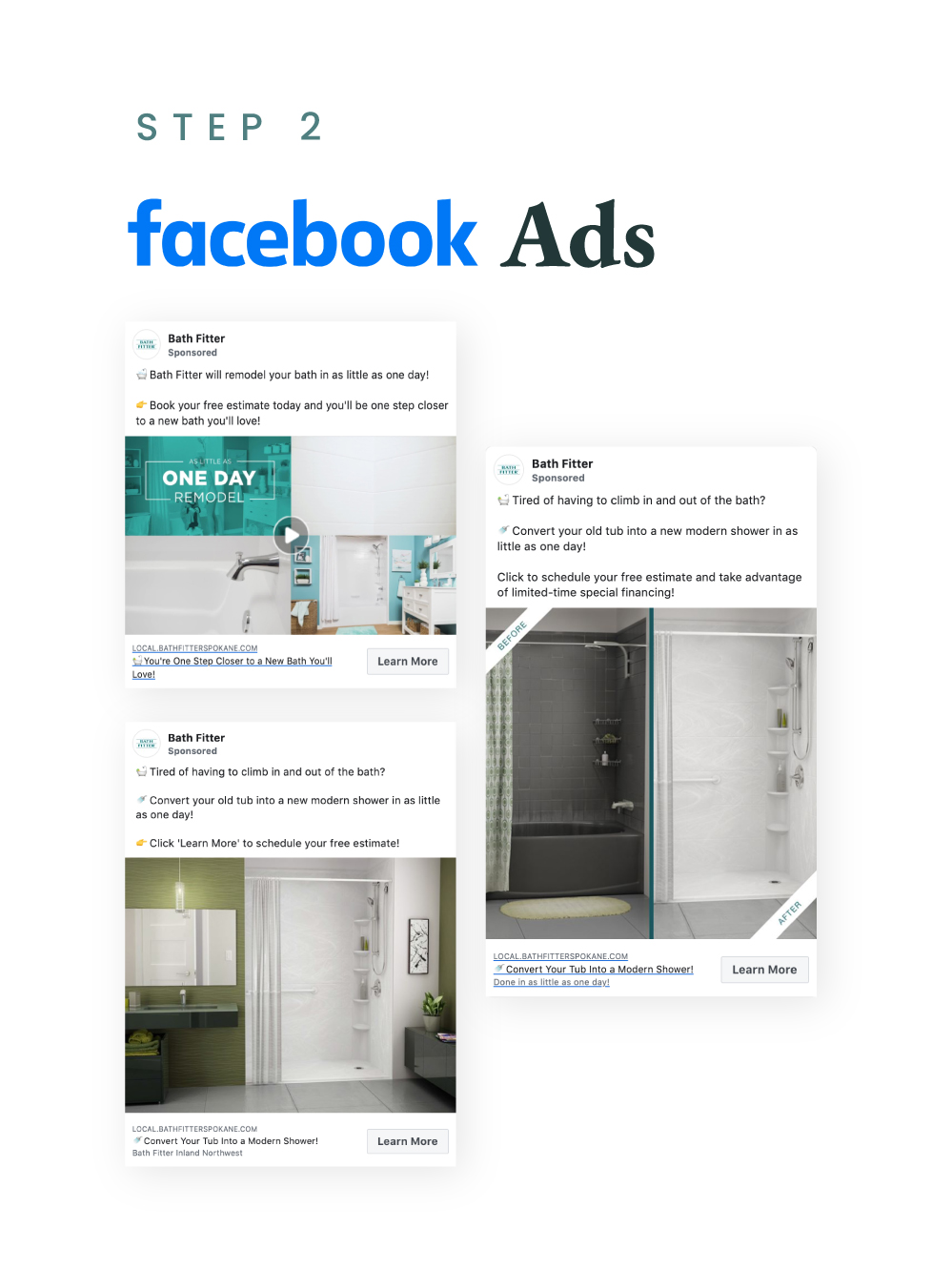 After running Google Ads for a couple of months and gaining their trust, the next natural step was to turn on Facebook ads. Our Facebook strategy was twofold and involved:

Direct response ads: Targeting homeowners who may be interested in upgrading/replacing their bathtub. This let us build an audience of people we could then serve more tailored ads to across both Google and Facebook.

Retargeting ads: Targeting everyone who engaged with our initial ads, visited our landing pages, or visited the Bath Fitter website without turning into a lead. Here, we used ads that explained to homeowners why Bath Fitter was the best choice for them. This included showcasing bathtub upgrade options, customer testimonials, their unique installation processes, financing options, frequently asked questions and more.

After running Google and Facebook Ads together for three months, their revenue doubled.

In those three months, Bath Fitter generated 88 leads and $60K in revenue.

This was truly just the beginning of their success with online advertising.

This final step is the most underrated but most important step in our journey with Bath Fitter.

As we already knew that Bath Fitter needed support on the lead handling side of things, we consulted with them to figure out how we could increase their speed to lead.

We introduced them to our Partner Program and they signed on with Hatch, an automated messaging platform, to ensure that every new lead would get an immediate response via email and text message.

Automated messaging sequences were set up so Bath Fitter could follow up at different times of the week to schedule appointments and move the customer further down the sales pipeline.

Since they started using Hatch, their closing rate improved significantly, allowing them to close more deals and make more revenue from the same amount of leads. This proves just how important speed to lead is!

The Results: Scaling to 200+ leads per month

Fast forward 2 years later, and this Bath Fitter franchise is averaging over 200 leads per month which comes out to 6 figures in added revenue per month, just from their online ads!

We’ve earned management’s trust over the years through transparency and realistic goal setting, and we continue to work closely with them in all areas of their marketing to continue pushing the envelope.

While Bath Fitter ultimately has complete control over their budget and ad accounts, they’ve given us the green light when it comes to their online advertising.

So long as transparency is maintained and metrics are respected (cost per lead, cost over revenue percentage, etc.), we can invest as much as we see fit to provide the desired results – all because of the relationship we’ve built with them organically over the past two years.

Although results were somewhat slow out of the gate, we worked closely with them to test and refine their campaigns, and over time we exceeded their expectations and revenue goals.

Moral of the story? Trust, transparency, and small progressions will lead to great results.

As for this Bath Fitter franchisee, they’ve been in business for almost a decade and this was their best year yet.

Ready to own your market?

Book a quick no-hassle demo to learn how you can scale your contracting business faster through proven, ROI-driven online ads.

Done-for-you online advertising for contractors aspiring to be market leaders.

Back to top
Page load link